Studebaker always liked to do things in a "big way".  Take for example this Studebaker pine forest on the site of their former proving grounds in Indiana.  5000 pine trees were planted back in 1937, it's visible to this day via Google Earth.  See it yourself at Lat. 41.668, Lon. -86.489. 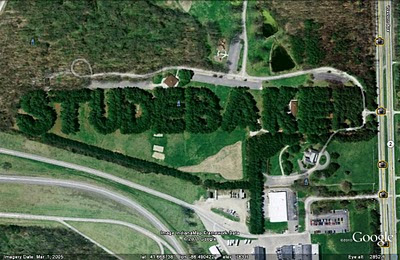 For even bigger things, jump to the rest of the entry.

Our first giant Studebaker is a 1931 Model 80 roadster. 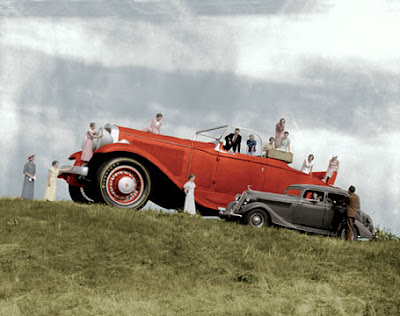 The following is from a nice writeup at the Studebaker Driver's Club page on the car...

"The length of the car they created was 41 feet with a wheelbase of 325".  It was 13 1/2 feet high, 15 feet wide, and weighed 5 1/2 tons. The wire wheels were the most exacting to make and each one was six feet eight inches in diameter and weighed 600 lbs ** . Firestone made the specially constructed tires, which replicated the originals to perfection. The steering wheel was 44" in diameter and the oval head lights 33 1/2". The huge dimensions of the car can be attested by the fact that 22 members of the Studebaker Champions Orchestra were accommodated in the driver's compartment with ample additional room for eight or ten more." 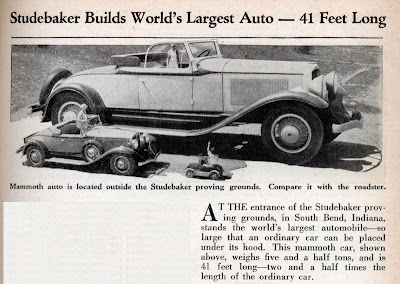 This awesome car came a fiery end on May 17, 1936 when it was burned intentionally because it wasn't needed anymore. 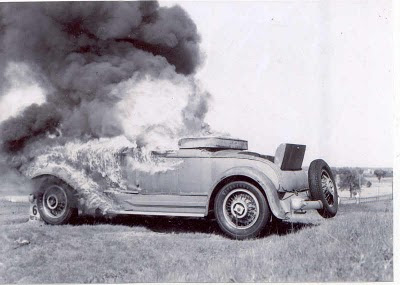 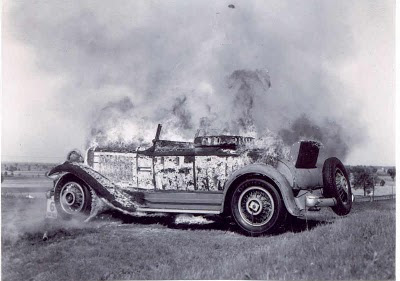 Fear not, however, because another giant Studebaker was constructed for display at the 1934 World's Fair. 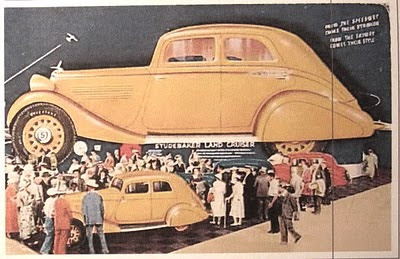 "The giant Land Cruiser, which reposed in the great hall of the Travel and Transport Building, was 80 feet long, 28 feet high, and 30 feet wide. The running boards were 21 feet in length, the windshield wiper three feet, and the tires 12.5 feet For maximum "eye appeal," it was painted Canary Yellow, a color later made available on production cars for an extra $80. Below the running board was a door that led visitors into an auditorium that could hold 80 guests. Films were shown that extolled the virtues of the new Studebakers and told, in dramatic fashion, how Studebaker had set more than 140 records for speed and endurance"