Posted by Jeff at 6:00 PM No comments: Links to this post 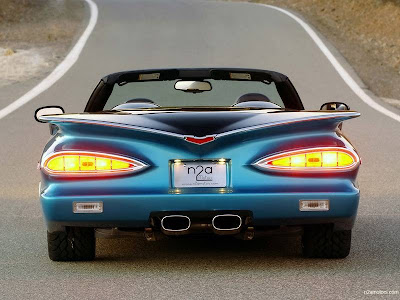 CLICK HERE to see the rest...
Posted by Jeff at 2:00 PM No comments: Links to this post

After posting yesterday's WTF??!! entry, I thought I'd go through my computer to look for other examples.  It turns out that there are plenty of them.  Click through to see some more. 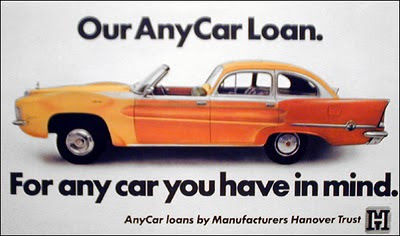 CLICK HERE to see the rest...
Posted by Jeff at 10:39 AM No comments: Links to this post

I have no idea what this is.  I see some early 50's Chevy along the sides, early 50's Oldsmobile in the front, Ford Cortina  in the tail lights with some '59 Buick in the fins.  Combine ingredients, mix well, and let sit for awhile.

Of the 35 or 40 cars and motorcycles I've owned over the years, only once (ok, twice) have I bought the almost exact same car again.  When I first moved to Texas back around 1977, my Datsun 510 wagon gave out on me across from one of the car dealers between Dallas and Fort Worth.  I hiked up the hill from the freeway and told the salesman to give me the cheapest car they had on the used car lot.

He showed me a 1969 Olds Cutlass 'S' that they had just taken in trade.  Back to the garage area we went, and here was a gold colored Cutlass 2dr hardtop that was filthy.  Dirt all over it, old tires in the trunk and back seat.  He said I could have it for $1,200, but they wanted to clean it up first.

I got a call a couple of days later and he told me the car was ready to be picked up.  He also said "you know, you're stealing this car from us". 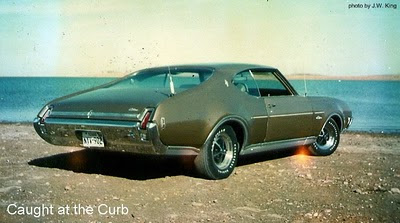 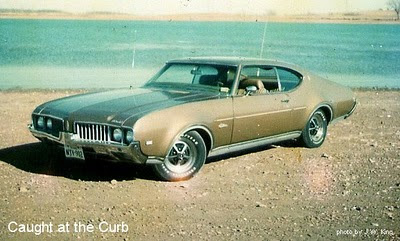 It was beautiful.  Aztec Gold in color, shiny, 350-V8 with a 4bbl.  Automatic on the floor, buckets.  It drove nice, and looked nice.

Flash forward to the early 80's.  I was sitting at the local Burger King with my then-wife.  It was a beautiful day, and I mentioned that I would really love to have a convertible for days like this.  To my surprise, she agreed (she wasn't a car person).  We started talking about what kind of ragtop would be good.  I always loved my Cutlass hardtop and said "I wish I could find a Cutlass convertible, just like my old one".  I no sooner said that, and while looking out of the window, we saw a gold colored '69 Cutlass convertible drive by.

Click through the jump to read the rest of the story...

Just the thing you need when the springtime floods hit your neighborhood.

The Lincvolt...rising from the ashes

Back in December, 2010, the completed Lincvolt, Neil Young's electric-turbine hybrid 1959 Lincoln convertible, went up in flames.  For those of us who have been following it for the last several years, it was a hearbreaking moment.  Like the Phoenix, however, it's rising from the ashes.
As posted on the Lincvolt Gazette..."On a project like this, setbacks happen for a reason and we can see that very well from here.  '(The) barn's burnt down.  Now I can see the moon'."
You gotta admire that kind of thinking.  Check 'em out and watch the rebuilding taking place on their webcam archive.

CLICK HERE to see the rest...
Posted by Jeff at 1:52 PM No comments: Links to this post

You might say that this reporter was "Caught at the Curb".   LOL!

Posted by Jeff at 11:41 AM No comments: Links to this post

I'm going to start adding some of the cars I've owned over the years so you'll know what I not only like, but actually put some of my cash into.

To lead off, this was my 1953 Buick Special 4dr sedan.  Read more after the jump. 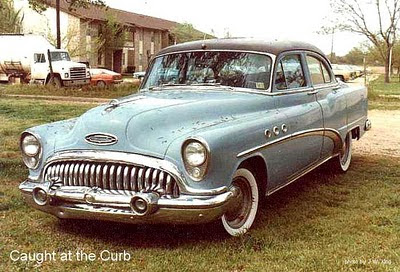 The last post gives me the chance to do a smooth segway from mystery cars to tasteless cars.  This Maverick is a good example.  Take a milquetoast fairly handsome (if average) car and modify it to something that the owner thinks is cool. 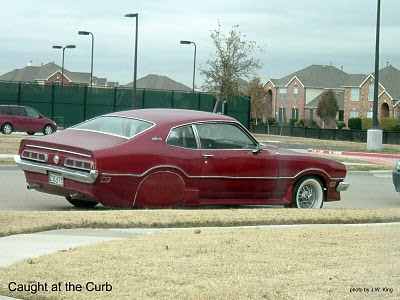 Yet another mystery car.

Let's keep with the theme of mystery cars for now.  I know this one is a custom, and there is no accounting for people's tastes.  However, adding four '59 Cadillac taillights to the rear of a sports car is pushing it a bit far.  I mean...one on each side would have been more than enough. don't you think? 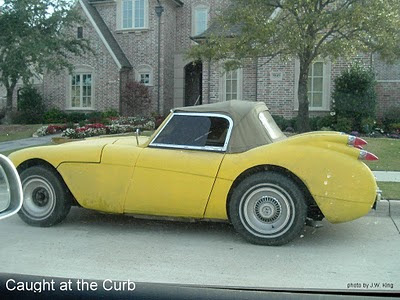 Identified!  Look after the jump....
I saw this thing on I-35E in Denton, Texas back in 2009.  I saw what looked like an oddly proportioned race car coming up in my mirrors, but couldn't get my cellphone camera ready before it passed me at around 75mph.
It's obviously a 4-wheeler, but it was low to the ground, had very streamlined bodywork including between the front and rear wheels, and very wide low profile tires.
Pretty cool looking, but I don't know how stable is would be on the highway. 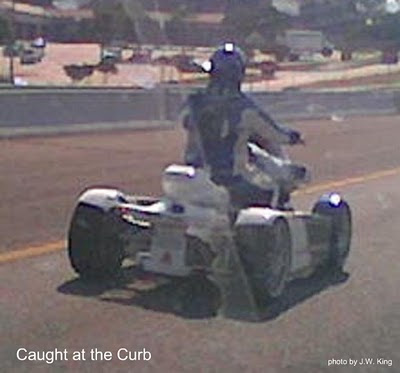 I caught this nice older sports car on the road back in 2007.
I'm pretty good with cars, so I should know what this is, but I don't.
Any ideas? 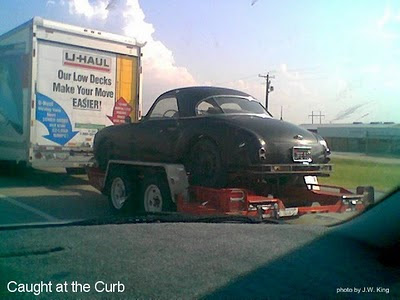 This isn't going to end well.

How do you extend your range?

From There, I Fixed It!

Posted by Jeff at 2:14 AM No comments: Links to this post

Email ThisBlogThis!Share to TwitterShare to FacebookShare to Pinterest
Labels: humor, There I Fixed It 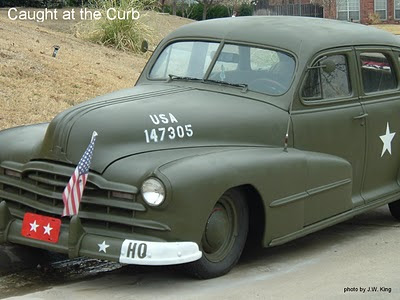 Look familiar?  It's the title photo for the blog.  I figured that it's about time I showed the rest of this interesting car.  It's a 1948 Pontiac Army staff car, dechromed and painted that nice shade of olive drab that Generals seem to enjoy so much.  Not something that you see parked along the curb every day.
CLICK HERE to see the rest...
Posted by Jeff at 2:05 PM No comments: Links to this post

I caught this 1958 Studebaker on the street.  It's not in too bad shape, but could use some TLC. 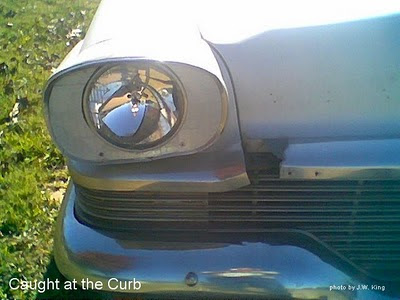 Let me take your Pulse

This rocketship started out life as a Pulse/Litestar autocycle.  Stock ones have larger wheels at the front and the rear, with smaller 'training wheels' in the 'wings' for low speed balance.  This one, however appears to have been modified to sit on a 3-wheeled motorcycle frame.  Still looks cool though. 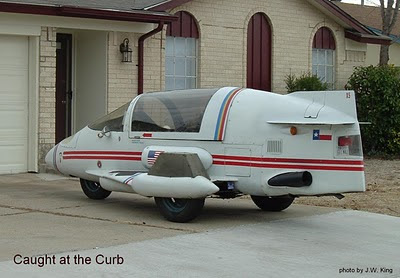 Not one of my pictures, but funny enough that I thought I should include it in here.

That Will Buff Out

Posted by Jeff at 4:31 PM No comments: Links to this post

Email ThisBlogThis!Share to TwitterShare to FacebookShare to Pinterest
Labels: humor, That Will Buff Out, trike CLICK HERE to see the rest...
Posted by Jeff at 12:04 PM No comments: Links to this post

If Batman built a Lead Sled 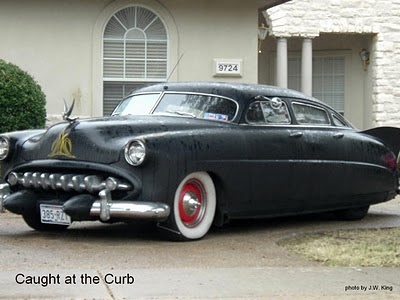 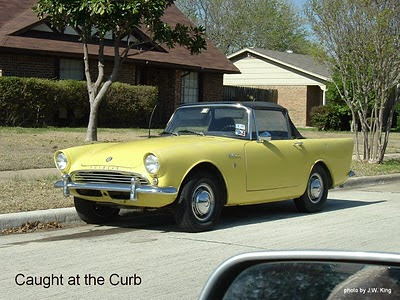 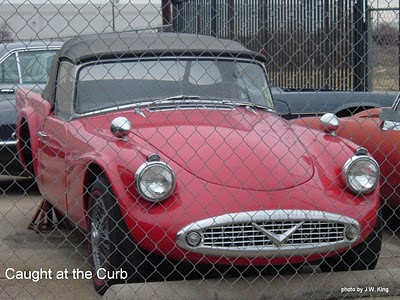 CLICK HERE to see the rest...
Posted by Jeff at 11:18 PM No comments: Links to this post