Happy Holidays to all of you CATC fans out there! 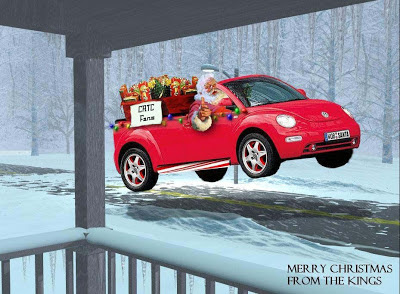 Have a safe and happy holiday season.
Posted by Jeff at 10:19 AM No comments: Links to this post

Email ThisBlogThis!Share to TwitterShare to FacebookShare to Pinterest
Labels: VW


I've never understood people who do things like this, but I'm glad they exist.  It makes the world so much more interesting.  Click the link above...this is a must-read.

Posted by Jeff at 10:23 AM No comments: Links to this post "The Baltimore City speed camera ticket alleged that the four-door Mazda wagon was going 38 miles per hour in a 25-mph zone — and that owner Daniel Doty owed $40 for the infraction.  But the Mazda wasn't speeding.  It wasn't even moving.

The two photos printed on the citation as evidence of speeding show the car was idling at a red light with its brake lights illuminated. A three-second video clip also offered as evidence shows the car motionless, as traffic flows by on a cross street."

Click on the above link to see the rest of the story, including a video of the alleged infraction.
Posted by Jeff at 11:19 AM No comments: Links to this post