While going through StreetViewFun the other day, I saw a picture of a really cool car.  I went onto Google Earth StreetView and found it, capturing a few more angles.  The location was in Turin (Torino), Italy.
I confess that I'm not up on supercars, but I don't think it's a production car.  Also, if you'll notice, it's being followed by a movie industry camera truck (with the cameras pointed the wrong way!).  It may be a custom car for whatever it was they were shooting.  Any ideas?  More pictures after the jump.

UPDATE:  Mystery solved thanks to a Jalopnik reader named Raphael.  It's the Giugiaro Quaranta Concept car from 2008.  This is a quote from the Jalopnik article:

"The Italian design house used Toyota's Hybrid Synergy Drive to power their idea of a futuristic super car employing state-of-the-art F1 technology. Giugiaro claims: "It is an "extreme", ecological, 4WD super-sportscar, the first hybrid car with mid-engine and driving position and a roomy cabin able to accommodate three adults plus a baby in complete comfort."

What it was doing on the street with a camera truck following it, I have no idea, but apparently it's also been used as at taxi!!  Go figure.

CLICK HERE to see the rest...
Posted by Jeff at 4:43 PM No comments: Links to this post

The following is an article from the Sept 1905 issue of Popular Mechanics concerning diesel engines.  I've been a fan of diesels ever since buying my 2001 Golf TDI and found this interesting.  Maybe you will too. 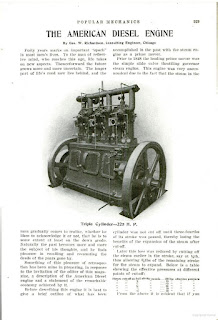 CLICK HERE to see the rest...
Posted by Jeff at 1:29 PM No comments: Links to this post