Article and photos by C.A.T.C. friend Wendell in Aurora, IL.


Check out this fabulous 1950 Ford coupe.  I'll let Wendell tell you all about it after the jump.  It's worth the read, and as usual, click the pictures to enlarge them. 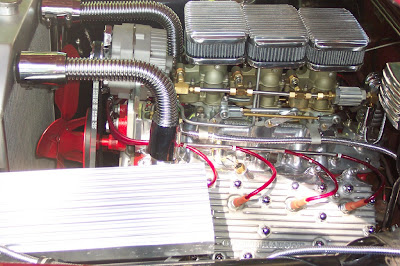 Here are some pictures of my own '50 Ford coupe. I bought it as a done car about 5 years ago, but I had to make it my own. I decided to make it a middle 50's style hot rod. In 1956 I was a sophomore in high school and as big of a car nut as there ever was. Hot rods were lowered in the back and everybody had LOUD exhaust. The guys that souped up their car engines often put the speed equipment manufacturers decals in the rear quarter windows. Coupes, convertibles and sometimes 2 door sedans were "in". 4 door sedans, station wagons and trucks were "out"! Fender skirts were up to each guy. Only the kids with rich parents had mag wheels and mostly on their 4 door sedans. Us regular guys either had plain steel wheels painted red, baby or full moons,or  full wheel covers off a Lincoln or a Caddy or almost anything with flippers on them. 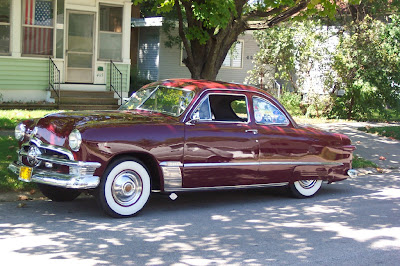 I had a mind full of ideas and a great car to work on. The first thing on the list was to rewire the car and convert it from 6 volts to 12 volts. I used a early 70's GM alternator.  The only GM part on the car, and the only visible deviation from the middle 50's theme. I added turn signals because the '50 came stock without. The original '50 dash knobs were an ugly sight! My Dad had a '49 Ford and I recalled the beautiful chrome ball shaped dash knobs on it. So a double handfull of '49 dash knobs were gathered from a handfull of places. The 2 inch chrome shifter knob is from Moon Equipment. 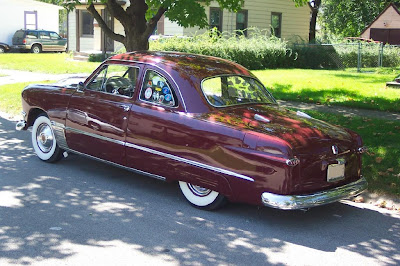 Then the rear end was lowered by installing 3 inch lowering blocks between the rear springs and the axle. I think the next thing to go was the hood ornament and replaced it with a Bull Nose. A Bull Nose is a piece of chrome shaped to fit the hood and the hood chrome and extends the hood center chrome forward to cover the same area as the original hood ornament. I added a set of fender skirts and 1952 Caddy full wheel covers and 2 inch white walls. The maroon body is finished off with period style pin stripes in gold, off white and silver. The hood, tops of the front fenders, around the door handles, the fender skirts and the trunk lid are striped. 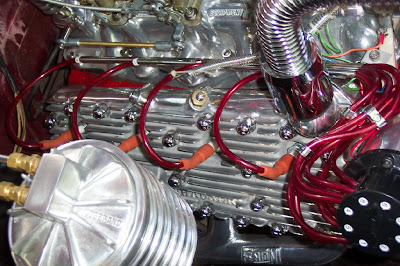 My favorite part of the car is under the hood! let us begin with the Ron Davis custom made all aluminum radiator to keep the old flathead cool. Then the Offenhauser 3 deuces intake manifold, with 3 restored '50 Ford carburetors with hand built progressive linkage and hand built stainless steel fuel lines. The distributor was replaced with an exact duplicate Joe Hunt Magneto. The heads are Offenhauser hi compression (8.2 to 1) polished finned aluminum. the exhaust flows through reproduction Fenton cast iron headers that have a powdered aluminum finish. The headers flow into 2 inch pipes and thru two 14 inch long resonator type glass packs.  As sweet sounding Flattie as you ever heard! An Iskendarian 3/4 cam and kit adds nicely to performance and the exhaust sound. The coolant runs to the radiator through ribbed polished stainless steel tubing. The wiring is covered with GM style chrome plastic loom as well as the hood release cable and several other under the hood uglies. The engine is topped off with a myriad of finned polished aluminum accessories. Everything on the engine that is not aluminum except the deuces is painted red. 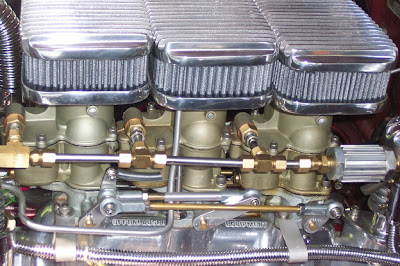 C.A.T.C. wishes to thank Wendell in Aurora for the great article, and Rick Aurora for putting him in contact with me.  Two great guys.
Posted by Jeff at 8:21 PM